Disc of the Week: Latitude 64º Havoc 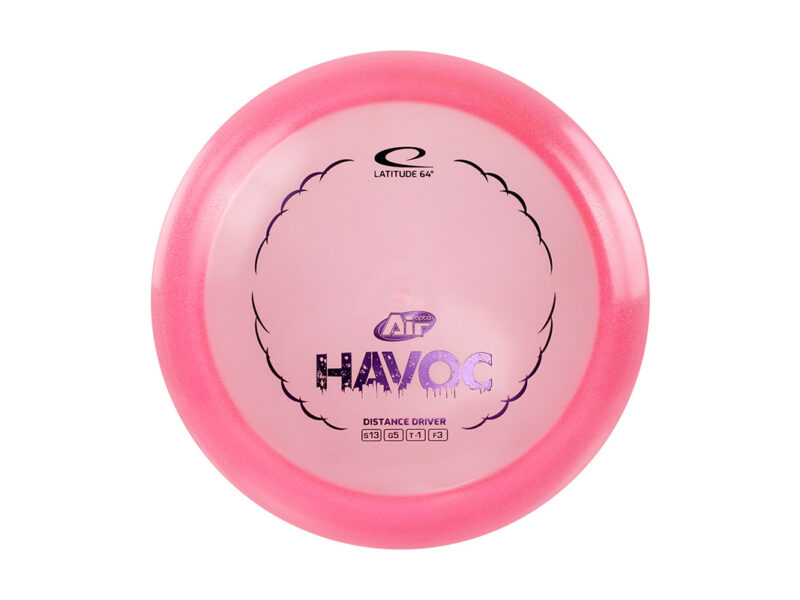 By most accounts, Havoc is a favored frontrunner for farthest flying of all the Trilogy long range drivers. This is despite being nowhere near the most popular driver nor having the greatest speed or glide in its class. This said, the unique combination of speed and glide that does characterize Havoc yields deceptively soaring flights that will have your playing partners begging “what did ya throw there?”.

Complimenting Havoc’s speed-glide combination is a controllable out-of-the-box high speed turn and an equally gentle low speed fade that is common to the longest flying discs on record, like the XL or Valkyrie. (Just turn the speed way up with the Havoc!) In short, Havoc is a hyzer-flip throwers dream and a great disc to develop your long turnover shot.

Havoc is also what I call a “spectrum” disc, meaning you can fairly easily work a new, slightly stable Havoc into an oh-so-valuable less stable version over the course of just a season or two and after not too much longer end up with a superior distance roller. All the best players agree that having different versions of one’s favorite mold is the way to go. If your local disc dealer has a stack of Havoc’s to pick from, know that the Feldberg rule applies in this case: flight-plate dome indicates stability. More dome equals more overstable. Variation by plastic is far less indicative of stability, however; I find Gold to start out more stable but break in more quickly than the Opto version.

As I always like to mention when applicable, Havoc’s design includes a slightly beveled inside rim/lip that provides a uniquely ergonomic feel. I first discovered this feature with Havoc’s overstable counterpart, the Halo, and haven’t looked back since. The same applies to my go-to midrange, the Core. For me the result is a comfortable grip and consistently clean release. I can’t recommend trying a Latitude 64 disc with this feature enough. To me this brilliant yet simple concept hasn’t received the recognition it deserves. This is especially true for the Havoc!

Disc of the Week: Latitude 64º Mercy